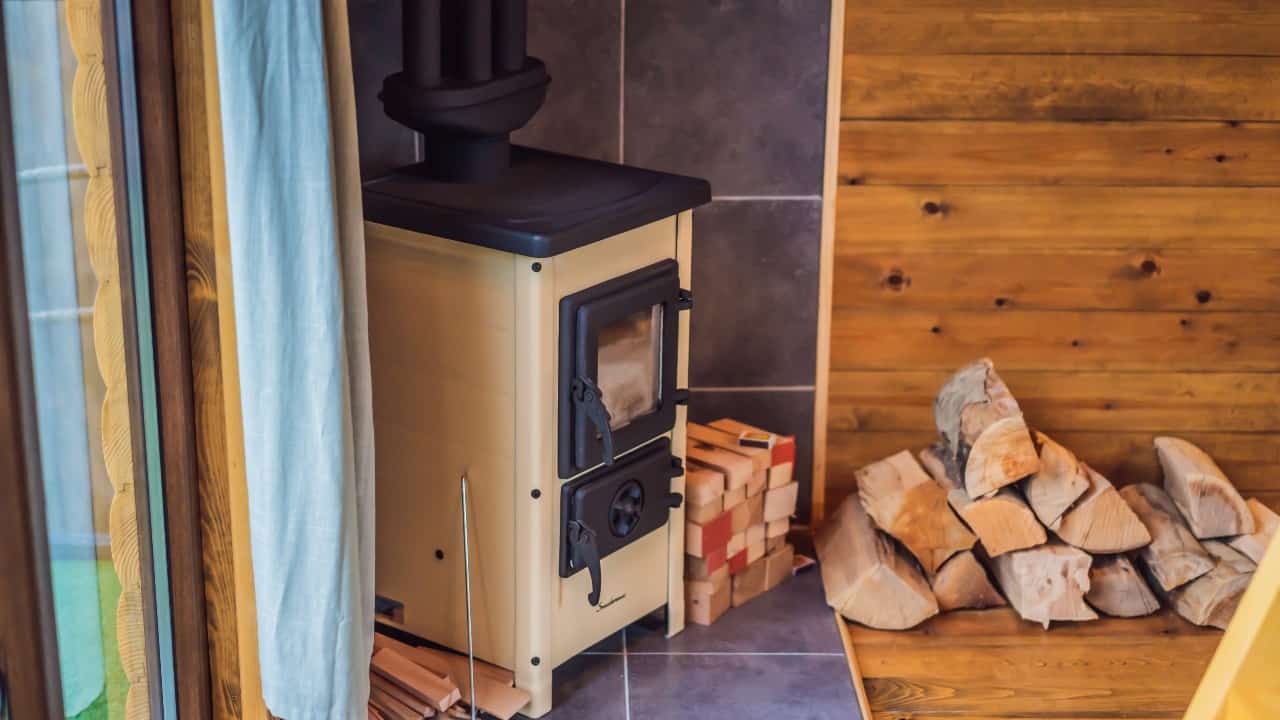 There are numerous homeowners who don’t know whether there’s any difference between these two fireplace parts – the terms have been used interchangeably for so long that the meaning of each has become unclear.

To put it simply, the purpose of the fireplace damper is to open and close the access to the flue. It’s a simple but extremely convenient mechanism that allows homeowners to expel smoke and retain heat or adjust the airflow to the fire, depending on the type of fireplace.

On the other hand, the fireplace flue is the opening through which the combustible gas or smoke can leave the fireplace and exit the house. The ventless fireplace is the only type of fireplace that doesn’t have this part.

Now that you do know what’s the difference between these two essential fireplace parts, I would suggest you to keep reading – I will explain how they work and help you learn how to use them properly and keep them clean.

As I mentioned above, the fireplace flue is a simple passageway that allows combustible gas or smoke to leave the fireplace and, in that way, escape the house at the same time.

A fireplace that doesn’t have a flue quickly fills up with toxins, such as hydrogen cyanide and carbon monoxide (the only exception here is the ventless fireplace – it is designed to work without a flue).

The fireplace flue is open at all times, regardless of whether the damper is closed or open. Closing the damper doesn’t close the flue – it just prevents the smoke from accessing it.

Once again, the only type of fireplace that doesn’t have a flue is the ventless one. These kinds of fireplaces release all the emissions they create into the room and significantly decrease the quality of indoor air in that way. Today’s market offers gas and electric ventless fireplaces.

An important thing to mention here is that pellet and gas stoves can’t burn without a combustible fuel. Ventless models are made in such a way that they can work with only a small amount of fuel, the consequence of which is a small amount of smoke being released.

However, there is still a debate on how safe these kinds of fireplaces actually are. Even though many manufacturers of ventless fireplaces have stated that their products are completely safe to use, they are illegal in many individual municipalities as well as in the state of California.

Should the Damper on My Wood Fireplace be Open?

Owners of wood fireplaces should open the damper just before starting the fire, and then leave it like that for as long as the fire is burning. The reason why this needs to be done is quite obvious – one has to allow the gases and the smoke to be drawn up the flue and safely transferred to the outside.

The damper should not be open the rest of the time (except in gas fireplaces). The gas fireplace pilot light should also be mentioned here – it should be on at all times, even when there’s no fire in the appliance.

This will discharge a tiny amount of gas into the air, and this gas will have to be continuously expelled to the outdoors through an open flue. This is precisely why the gas fireplace dampers should remain open all the time.

Depending on what type of fireplace you’re using, your fireplace may not need a damper at all.

Vented fireplaces, for example, are always equipped with dampers. Ventless models, on the other hand, have no flue and therefore do not require a damper.

Older, wood-burning fireplaces that were built before the installation of the damper may not have one. However, the damper can be easily added to such fireplaces – all you need to do is hire an expert to install one for you.

In wood or pellet stoves – so, not fireplaces – the purpose of the damper is to allow the homeowner to control the burn by adjusting the airflow to the fire.

The dampers found on wood-burning fireplaces, on the other hand, do not affect the air intake in any way. However, having the ability to close the flue is still essential – by doing so, you’ll be able to expel the smoke or retain heat as needed.

Should I Leave the Fireplace Damper Open During Summertime?

When it’s open in a wood stove, the damper lets the air that’s inside the house escape to the outdoors. As you can already guess, this can lead to higher air-conditioning costs during summertime and increased heating bills during the winter months.

Homeowners who do not use indoor air conditioning often think that leaving the fireplace damper open can cool the air inside the house. However, doing something like that is almost identical to leaving a door open – the effect is minimal and pretty much worthless.

Besides the fact that it won’t really cool the house down in any way, leaving the damper open during the summer months can also let small animals – such as birds – get inside your home.

What is more, it can also bring down all sorts of unpleasant chimney smells into the house. Close the damper, close the door, and cool your house down by using a fan.

How to Determine Whether the Damper is Open or Closed?

It’s actually quite easy to tell whether the fireplace damper is in the opened or closed position. If you’d like to start a fire but you’re unsure of the damper’s position, simply take a flashlight and look up your flue.

In most cases, the damper will be located toward the flue’s bottom, and you should have no trouble seeing whether it’s closed or opened.

To put it simply, if you can’t see up the flue, that means that the damper is closed. On the other hand, if you can see the sky through the chimney, your damper is in the open position.

How to Determine Whether the Flue Needs Cleaning?

There are quite a few indicators that can tell a homeowner that it’s time to clean the chimney flue.

Does your room fill with smoke every time you try to start a fire, even though you’re keeping the damper open? Is there a continuous backdraft coming from your chimney?

These and other similar symptoms indicate that your chimney is full of creosote – make sure to clean it out as soon as possible. Other signs that imply a partially-obstructed wood-burning chimney include:

Even if you don’t notice any of these signs, it’s never a bad idea to thoroughly clean your chimney flue just to be on the safe side. While it’s true that you can easily inspect and clean the flue on your own, you can also hire professionals to complete this job for you.

Either way, this part of the fireplace needs to be inspected and cleaned at least once a year.

How Can I Inspect the Flue By Myself?

For a safe and efficient inspection of a wood-burning chimney, you will need a fireplace poker, flashlight, safety goggles, and a dust mask. Keep in mind that the process of checking a gas fireplace is a bit different – more on that later.

The first thing you’ll want to inspect is if there’s any downdraft coming from the chimney. Doing this is as easy as it gets – just place your hand below the opening and feel for air movement.

Another way to do this would be to tape a piece of toilet paper to the fireplace and determine in which direction it seems to blow. In case you are dealing with a chimney downdraft, you’ll have to keep the room windows open until a change in the airflow takes place.

After that, take the fireplace poker and reach above the damper with it. Try scratching the walls of the flue with the poker.

You’ll know that your fireplace needs a thorough cleaning in case you make a deep scratch in the black creosote. If the scratch is particularly deep – around ¼ of an inch – stop using your fireplace immediately and make no fires in it until it’s completely clean.

While you’re doing all of this, make sure to check for loose or cracked tiles as well. Another thing to look for would be the uneven joints on the metal flue liner. Don’t forget to check for any kinds of debris or obstructions too.

How to Inspect a Gas Fireplace?

The aforementioned build-up of creosote is something you’ll have to worry about only if you’re using a wood-burning fireplace. That doesn’t mean that those who own gas fireplaces shouldn’t check them regularly, though.

If you have a gas fireplace, make sure to inspect it at least once a year – check for obstructions, debris, or any other kinds of safety issues.

While this is undoubtedly something you can do on your own, I would still recommend hiring an expert for this task and having them inspect the whole HVAC system at the same time. If you still want to do it by yourself, follow the next steps:

How Can I Clean the Flue?

If you decide to have your chimney cleaned by a chimney sweeper, make sure to hire a certified professional. You can expect to pay between $100 and $300 for this service, depending on where you live.

If you’d rather do this job by yourself, I would recommend using a Chimney Safety Institute of America-certified creosote sweeping log.

This kind of product looks just like a regular wood log and should be put into the fireplace once the fire has been started. It will burn for about one and a half hours and effectively reduce the build-up of creosote in your flue.

If you decide to use a creosote sweeping log, keep in mind that this product shouldn’t completely replace your yearly flue inspection and cleaning.

The Tools Needed for Manual Cleaning

If you’d like to avoid using a creosote sweeping log and would rather put some elbow grease into flue cleaning, you will need the following tools:

In summary, the fireplace flue and the fireplace damper are not the same things – these terms should not be used interchangeably, as they often are.

The damper is the part that allows and prevents access to the flue, while the flue itself is a passageway that allows gas and smoke to escape the home. Make sure to keep both parts clean and in good working order and you’ll never experience any trouble with your gas or wood-burning fireplace. 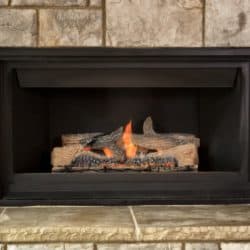 Should You Open the Flue on a Gas Fireplace? 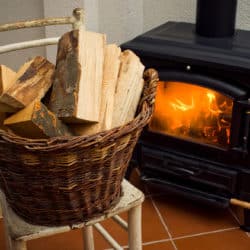 Best Types of Firewood for Your Wood Stove or Fireplace 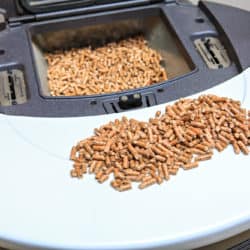 8 Picks for the Best Pellet Stove for Home Heating