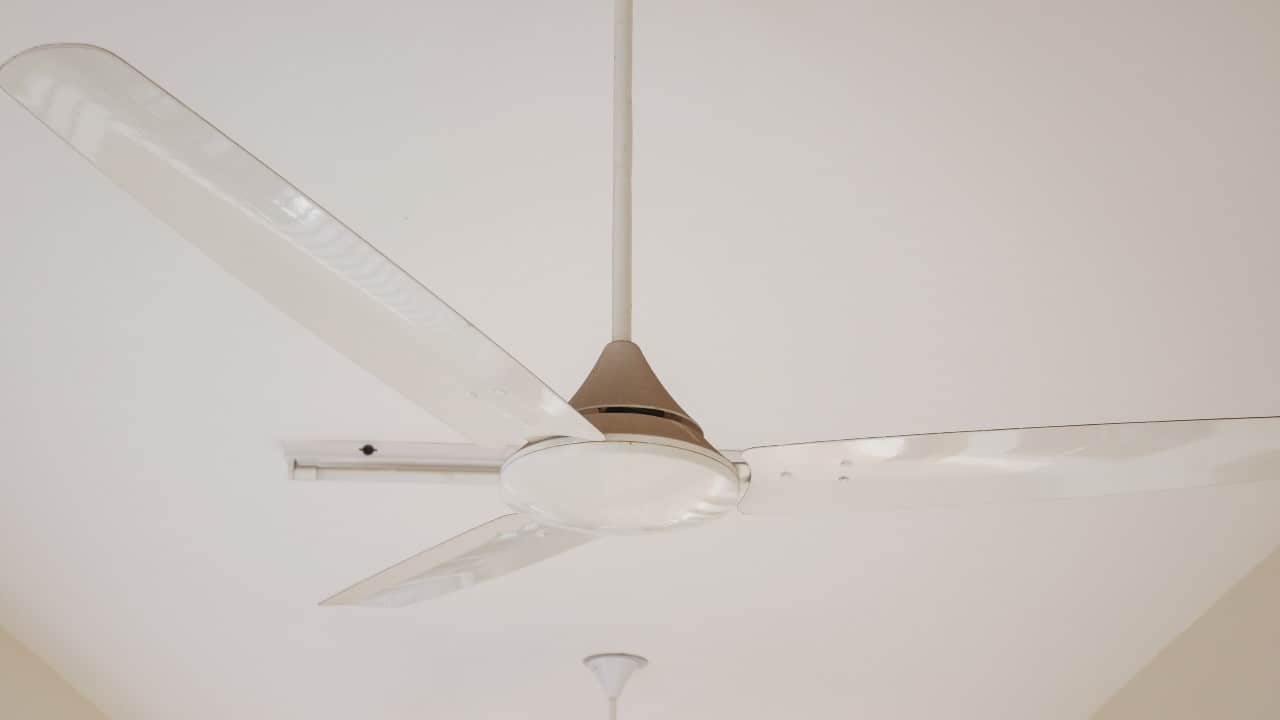 During the renovation, most homeowners are happy to keep their ceiling fans right where they are. However, sometimes these simple but extremely convenient appliances end up with missing or broken parts, and these need to be replaced. One of those parts is the ceiling downrod.

If you’re currently looking to replace your existing downrod, you’re probably wondering whether these things are interchangeable. Can a ceiling fan be used with just any downrod? I’ve done a bit of research to help you with this and other questions related to this important topic.

However, all of this doesn’t mean that it’s impossible to find a matching downrod for your particular ceiling fan. If you’d like to know more about this – as well as about choosing and installing these products – make sure to keep reading.

As I’ve stated above, the answer to the question of “are ceiling fan downrods universal?” is rather simple – they are not. But why is this the case?

Ceiling fan downrods (also known as ceiling fan extension rods) are not interchangeable due to a couple of potential differences that exist between these products. Understanding them is essential if you’re currently looking to replace your existing ceiling fan with a new one:

In order to be able to use a ceiling fan safely, a homeowner needs to buy a product of this type that bears a UL rating. This kind of safety rating is assigned to all light fixtures, as well as to the parts that accompany them.

The first UL rating is “wet-rated”. As its name suggests, this rating tells us that a particular ceiling fan downrod can be safely used in wet outdoor spaces.

The second is “damp-rated”. If your newly-bought downrod bears this rating, it means that it can be used only in those spaces where it may experience light moisture. In other words, you’ll be able to safely use your ceiling fan downrod on a covered porch.

The final rating is “dry-rated”. As you can already guess, ceiling fan downrods bearing this rating can be used only in dry indoor spaces. These include the living room, bedroom, kitchen, and other rooms of your home.

Another important difference is the size.

When it comes to the ceiling fan downrod length, it’s essential to understand that most ceiling fans come accompanied by downrods that are between 3” and 6” long. These are an ideal choice for the ceiling height of eight to nine feet.

Not all extension rods have these measurements, though. Those who want to do so can obtain one of these products at the desired length and desired hanging height. This simple metal pipe can be up to 60” long, which is precisely what you’ll need if you have a huge room with a ceiling height of 15 feet.

The installation method is yet another important department in which ceiling fan downrods differ. Depending on how they’re installed, they can be either threaded downrods or non-threaded downrods.

Ceiling fan manufacturers design and sell downrods of different colors and shapes. Some of the most popular colors include matte black, nickel, gold, and bronze.

If you want to replace your old downrod with one that will match the aesthetics of the room, you will probably be able to do so – the selection is enormous.

However, an important thing to keep in mind here is that colors can differ from one brand to another. Depending on the manufacturer, the “brushed copper” color may look completely different, for example.

The Importance of Ceiling Downrod Length

Those shopping for a new downrod should keep in mind that the downrod length really does matter.

As I mentioned above, these essential ceiling fan parts usually come at lengths of between 3 and 6 inches. These are ideal for standard-size rooms (ceiling fan height of 9 feet) as well as for standard ceiling fans.

However, depending on the ceiling height of the room you’re looking to equip with a fan, you may want to go longer or shorter. Here’s a simple downrod length chart that should help you determine the total downrod length based on the height of your ceiling:

How Do I Replace a Ceiling Fan Downrod?

Obviously, the first step in replacing an extension rod is removing the old one from the ceiling, if you haven’t done that already. Make sure to shut down the corresponding electrical breaker first – you’ll have to disconnect some electrical wires during this task and you’ll want to stay safe while doing so.

Once you’ve unscrewed the canopy from the ceiling, take a voltage tester and make sure that there’s absolutely no electricity being delivered to the wires beneath the canopy. After that, simply detach the wires and remove the ceiling fan in its entirety.

Installing modern ceiling fans is an easy job. Simply reconnect the aforementioned wires, put the ceiling fan into its place, and screw on the canopy.

What Will Happen If I Use a Wrong Downrod?

The well-known “that will do” approach can be quite tempting when it comes to buying a brand new extension rod for your ceiling fan. You find one in your local hardware shop and it’s not only cheap but also looks pretty good – why not go with it?

While it’s true that doing something like this is bound to save you some money now, it could turn out as a huge mistake later.

The first problem – which you’ll notice the very moment you try fitting the downrod – is that it doesn’t fit. It’s as simple as that! Fortunately, it’s almost always possible to return this part of the ceiling fan, in which case you’ll only be wasting the effort and time to go and get an adequate downrod.

If you do manage to fit the downrod, but not fix it entirely, you’ll be running the risk of the ceiling fan blades wobbling and shaking every time they’re in operation. This can lead to unnecessary wear and tear on the fan and potentially even cause a fire. It could also detach and fall down from the ceiling while spinning, which is certainly something you don’t want to happen.

In any case, skimping on a new downrod definitely isn’t worth it.

Is It Possible to Shorten or Extend Downrods for Ceiling Fans?

In some cases – particularly when you have a really old fan – you won’t be able to find a replacement downrod for it. Fortunately, however, shorter ceiling fan downrods can be turned into extended downrods and vice-versa.

For this, you will have to clamp two downrods together with the help of a device called a downrod coupler.

This simple but extremely useful item is capable of holding two downrods together, which can then be secured and tightened with a couple of screws. The only issue that can arise here is the coupler not being of the same color as the two downrods.

Shortening one of these things, on the other hand, is a bit more complicated and requires some DIY skills. As such, this job can easily go wrong if you don’t know what you’re doing.

You will need to cut down the downrod to the length that you desire and then drill a new hole on it in order to be able to attach it.

Unfortunately, not all downrods can be shortened that easily, and this is particularly true for those that have threads on both of their ends. To shorten such a downrod, you will need a re-threading tool.

How Low Should My Ceiling Fan Hang?

The minimum recommended height at which your ceiling fan should hang is seven feet above the floor. This gives people enough space to freely and safely walk under the fan.

At the most, an extension rod should hang 10 feet above the floor. Ceiling fans hanging at this height can efficiently cool a room and take care of poor airflow. You can, of course, hang your ceiling fan even higher, as shown in the chart above.

Also known as a “hugger” ceiling fan, the flush-mount ceiling fan can be attached straight to the ceiling. In other words, installing this type of fan doesn’t require a downrod.

It goes without saying that these kinds of not-so-standard ceiling fans are the best option for rooms with low ceilings. Flush-mount fans can also make ceilings in such rooms appear taller.

Can I Mount My Ceiling Fan at an Angle?

Sometimes, homeowners want to mount ceiling fans on cathedral ceilings or vaulted ceilings. Fortunately, installing a modern device of this type on a vaulted or cathedral ceiling is rarely an issue.

This is because most ceiling fan manufacturers equip their units with ball-and-joint systems – these make the connection between the canopy and downrod very flexible. This allows easy installation of most fans to vaulted ceilings, as well as to a cathedral ceiling.

Hunter is undoubtedly one of the most popular ceiling fan brands.

But even though Hunter ceiling fans and Hunter downrods are made by the same brand, they don’t always fit each other. Some ceiling fans made by this company require single-threaded extension rods and some require double.

The downrod is an essential part of the ceiling fan for a variety of reasons, including functionality, safety, as well as aesthetics. However, not all downrods are created equal, i.e. they are not interchangeable or universal.

They can vary in installation methods, colors, sizes, and safety ratings. For that matter, it is crucial that you do a bit of research before shopping for a new downrod for your ceiling fan. 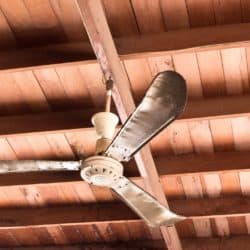 Are Ceiling Fans Supposed To Wobble? (And How To Fix That) 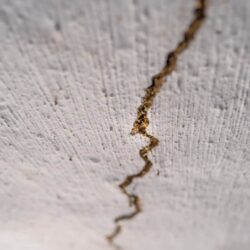 Types of Ceiling Cracks With Pictures 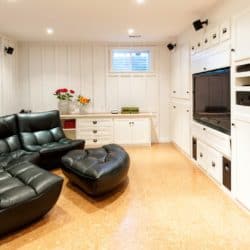 Does A Basement Ceiling Need Insulation?